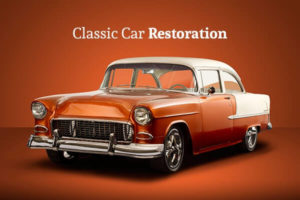 For those who enjoy restoring cars, the more popular classic cars are generally the most satisfying to restore. There are other factors, however, that play into the attractiveness of restoring specific classic cars, such as resale value and the ease of finding replacement parts.

Furthermore, there may be some people who aspire to own a classic car but are not able to afford the high price tag. Such car enthusiasts can however search for used classic cars for sale in Texas that they can get for a much cheaper price and then restore the car to make it appear brand new again. With that in mind, here are the 10 best classic cars to restore:

It was one of the last 1960s muscle cars and it was seriously considered a massive challenge to the Chevy Corvette. Packaged with a 6.4 liter V8 engine, the AMC AMX beat out the Corvette in price and could tear rubber on the road just as hard and fast. Because the AMX was only produced for three years it’s a real popular gem to restore. This car may present a challenge for some, but the chase for parts is half the fun for those who like hard restoration projects.

Another sports car, the Austin-Healey had a much longer life in production, running from the end of the 1950s to the beginning of the ’70s. That generational span allowed the car to gain a significant following, despite its small size and stature in what was a large car world at the time. Because of multiple years of production, the Spring is a great first car restoration choice. Plenty of manuals and a great availability of parts make this car a great starter project for a restoration rookie.

A short-lived car that barely had any time in the sun, the Riviera competed against other two-door models and was the rival that General Motors needed against competing car manufacturers during the 1960s. The Riviera was favored by car critics and magazine writers, but it didn’t seem to have long-term market success. This one falls into the hard-to-restore category due to its rarity.

In the early Fall of 1966, the Vietnam war was raging and facing great resistance. In the midst of this chaos, the Chevrolet Camaro was launched. For a classic car restoration project, the Camaro is neat because there were so many different versions of the car.

For the ultimate muscle car – and one of the last big engine models before the U.S. started worrying about the environment – the Corvette is king. Today’s version is merely a shadow of the early Corvette; it reached its sleek famous look and performance at the end of the 1970s. The car is all about body and engine, so it’s a great restoration project choice for engine experts and those who enjoy experimenting with paint options.

Also a big contender among the muscle cars, the Dodge Charger was an economic entry that proved to be a great contender against the Mustang and the Camaro. Chargers are one of the most-picked cars for restorations because they look great, there are lots of parts available, and the car is easy to work on.  Under the hood is the classic V8 engine with 330 horsepower, but it also has options with a 440 Magnum engine or the infamous 426 Hemi block.

Small and snappy, the Fiat Spider was a single man’s car to drive around the urban landscape. This car was quick and easy enough to drive out of town as well as into the country. It had 18 years of production, so there is a large inventory of parts, even 30 years later.

Did we mention the Mustang? Yes, but not in its own paragraph. This classic set the standard for American muscle car design in the 1960s golden age. Everyone wants a Mustang when they see it rumble by on the road; despite this version’s short production period, there are plenty of parts available.

Among the big road kings, the Thunderbird reigned and had many a rock song written about it. It was the luxury car to have in the 1960s and was all about look and design. These cars a bit hard to find, but can trigger some fun trips – particularly to the desert where many restoration projects-to-be are still in very good condition.

The final contender is the Triumph. For restoration, this one has a healthy number of production years, but it was a British export. Fortunately, 86,250 of them were sent out of England, and most went to the U.S. That means lots of support and availability of parts for rookie classic car restorers.

If you’ve got a classic car that you want restored, City Collision Center can help. They have restored hundreds of classic cars and can take on even the most extensive and complicated restoration projects.