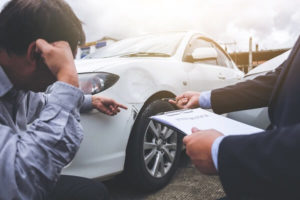 If you’re like most consumers, you believe having your car “totaled” is a worst-case scenario. Some errant driver has collided with your car leaving you nothing but the steering wheel to walk home with. You can witness this sort of embellishment in cartoons and comedy movies.

Well, in real life, a serious auto accident is no laughing matter. But, do you really know what it means to have your car declared unsalvageable? Do you realize a debilitating accident is not necessary?

In reality, your car or another vehicle can be declared totaled without suffering any significant visible damage. Read on to find out just how it can happen.

Definition of a “Totaled” Vehicle

It is crucial that you know the legal definition of an unsalvageable car within your jurisdiction. Otherwise, if you do have an accident and need to collect insurance for the damages, you could find yourself surprised by the assessment offered by the insurance carrier.

In general, a totaled vehicle refers to one in which the highest possible resale value is less than the amount of damage sustained. Because fixing the car would cost more than you could recoup by selling it, the insurance company considers the situation untenable.

Yes, it is all this simple. Now, the hard part is assessing the actual resale value and total monetary damage. These decisions can be entirely subjective.

Policyholders and their insurance companies often disagree on the numbers. For this reason, you always want to choose a reputable auto repair center to help you prove damage costs.

If you own a vehicle that for whatever reason has a low market value, even a small amount of damage can render it unsalvageable. On the other hand, if you drive an expensive luxury model, you will usually have to sustain a significant amount of damage to be considered totaled.

Always remember that resale value can be either the current dealer rate in your area, average private party rate, or a whole car value. Be sure to know just which standard your insurer tends to use.

Now, as mentioned above, it is usually the case that expensive cars require extensive damage before being considered total losses.

Yet, odd cases do exist. For example, a Corvette owner had the misfortune of being unable to avoid a large piece of road debris that rolled under the vehicle on a high-speed freeway. There was no damage to the car, except for a rear frame.

All is well; you would think, right? Well, the owner found out that the frame was irreplaceable. Nor, could a mechanic perform a welding job without altering the structure of the vehicle. The result? This Corvette that looked to be in perfect condition was declared totaled.

After an insurer declares a car a total loss and pays the claimant, it then takes ownership. The company will attempt to find a buyer.

Repair facilities often purchase totaled cars for the parts. Private individuals, such as yourself, can also get in on the action. Remember that just because a car has been listed as totaled does not mean it is damaged beyond all repair. You can find many bargains at salvage title sales.

A totaled vehicle is one in which the expected real value is lower than the expected cost to repair it. You might find yourself a hidden gem at a salvage title sale or auction now that you know what “totaled” really means.