Home  »  Auto Body Repairs  »  How Much Do Dents Really Hurt Your Car? 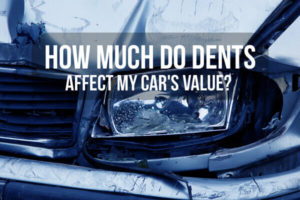 Every car takes punishment. Whether you treat it like a pack mule or a precious child, it will eventually get at least a little ding. For many of us, it’s easy to shrug off the little dents. As long as they don’t change how the car drives or threaten long-term problems, we can ignore those dents and carry on with our lives. This is a reasonable outlook, but you probably won’t try to keep your car forever. When it does come time to part ways, you might find that the cost of fixing that dent is far less than the cost of leaving it untouched.

The first thing you need to understand the impact of dents on car value is that it isn’t fixed. Appraisals (which we’ll talk more about in a moment) are largely subjective, and the assigned value of any car will change depending on who is looking at it. Even if a consensus could be agreed on the value of a car, the effect of a dent is still going to vary.

The most significant factor in this whole deal is the initial value of the car. You can think of dents as depreciating your car by a percentage of its normal price. If you have a $50,000 sports car, a dent is going to hurt its resale by a lot more than an old Ford Pinto with 350,000 miles on it. With that in mind, two factors change the devaluation level of a given dent: Is it visible from more than 10 feet away? Is it a deep enough crease to impact the paint? If either of these is a yes, then you can expect the average effect of the dent to be between 5 and 10 percent of what the car would otherwise be worth.

Now that you’re starting to think a little more deeply about how dents impact car value, you can see that even the above estimate is pretty rough. A more thorough analysis of dents and car price can be seen by breaking down the appraisal process. Appraisals are common either before an insurance-paid repair or before a car is traded or sold. You already saw that appraisals could vary wildly by the appraiser, but there are some consistencies. In most cases, a review of the car will have it classified as excellent, good, fair, or poor. Excellent cars are mostly brand new. However, roughly 80 percent of all appraisals place cars in the good category. A poor car is one you know is barely running and often an eyesore.

These appraisal ratings are based on every aspect of the car. Age, mileage, and driving conditions (such as the state of the engine and suspension) are obviously the most important and bear the most weight, but the interior and exterior conditions still matter. A car with fewer than 1,000 miles and in perfect operating condition will not receive an excellent appraisal with any noticeable dings or dents on it. In fact, stains and fabric rips on the interior tie with small dents as the leading causes for cars to be appraised at a lower value than expected. As an example, you might look your car up in Kelly Blue Book listings and see one price only to be offered something lower at the dealership.

In fact, dealerships and potential buyers will often offer less than what you expected when you price checked your car. Sometimes, this is a sales tactic to try and make money, but all too often it’s a fair assessment. This comes down to sale-ability. The estimated value of your car in a price guide is based on general market conditions and certain assumptions about the vehicle’s condition. Dents rarely affect how well the car drives or how long it will last, so they have a disproportionate impact on sale-ability.

The concept is pretty simple. If you have two virtually equal cars in front of you, you’ll probably pick the prettier one. This is compounded by the fact that most buyers have limited car knowledge. This leads many buyers to overvalue the dents. Even when you trade a vehicle in to a dealership, they have to consider this interaction when they try to sell your car. The whole process means that a dent that has no impact on performance can still hurt your bottom line by thousands of dollars.

So, dents will typically lower the value of your car. The final question is whether or not it makes financial sense to get them fixed. The best way to be sure is to get an expert consultation. You can’t weigh costs until you know how serious the dent is and what it might cost to fix it.